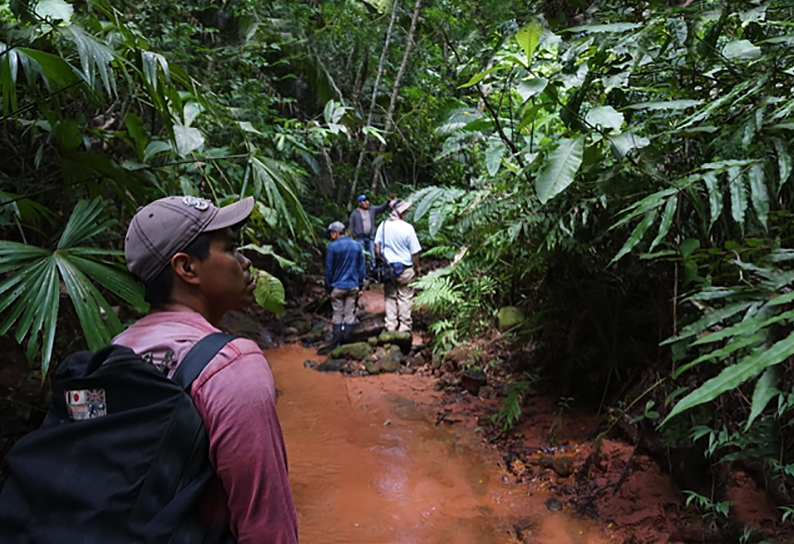 In Songs of Adaptation, Bird Songs and Community Knowledge Unite to Shed Light on Climate Change

I trekked through the Bolivian rainforest for a Future Generations University research project. This is what I saw.

Editor’s Note: Songs of Adaptation is a research project of Future Generations University combining community knowledge and bioacoustics to monitor climate change. Instruments in Bolivia, Nepal and the United States gather bird songs and temperature and humidity readings. Researchers also rely on vegetation surveys, wildlife cameras, geographic data and community input. Taken together, this data set allows the Songs of Adaptation team to identify changing patterns in the environment. More than just science, the information is then shared with communities to help inform sustainable adaptation and evidence-based decision making.

Here, audio engineer and socioenvironmental specialist Shane Palkovitz shares what it was like setting up monitoring stations in Bolivia.

Carrying modern computer equipment through primeval rainforest, I spent the first days of my time in Bolivia in March trekking through the jungle. Working with local partners, our goal was to install four monitoring stations that will serve as the beginning point for a larger research project.

Songs of Adaptation, a research project at Future Generations University, is establishing an international baseline for biodiversity and working with communities to gather knowledge about climate change to inform adaptations.

In concert with local partners and community members, we designed a preliminary study near Rurrenabaque, a small town on the Beni river known as the gateway to Bolivia’s northern rainforest. The installation includes four monitoring stations in different habitats, all within a 500-foot elevation range. The study design relies on community partners to collect and transfer data.

The monitoring stations each include a bioacoustic recorder and a climatic logger. The audio recorders make five-minute-long sound files, then go to sleep for ten minutes. Then they wake up and do it again, all day, round the clock, week-in, and week-out throughout the year. The climatic logger notes the temperature and humidity every fifteen minutes when the bioacoustic recorder powers on. Over time, we hope to see meaningful trends emerge in the data.

At the first monitoring station, I showed the local team how to install the equipment. At subsequent stations, I stood back to allow team members to demonstrate that they had learned how to work with the equipment.

It is important that local team members be able to carry on the program without outside help being present on site. While the first wave of instrumentation is in place and generating data, team members are already in the early stages of designing a biomeridian (a transect of monitoring stations, over an elevation gradient) that will reach from the first four monitoring stations across a large expanse and finally terminate above the tree line.

While the current stations are hoped to be the beginning of a longer transect, they are also fully functional on their own. Initial bioacoustic data is rolling in now. Through time, we will have an auditory record of bird species location. However, plants don’t sing. If temperature shifts are causing plant species to make elevational shifts as well, we want a record of that.

We live at a strangely suspended moment in the world, where Indigenous people in many locations walk barefoot through jungles, smartphones in-hand. We started an iNaturalist collection project to help document biodiversity from afar. We spent a few days around the monitoring stations, using smartphones to photograph plant and animal life. In Bolivia, local team members have extensive knowledge about native flora and fauna. We were able to work together to learn how to use the iNaturalist (“Naturalista” is the Spanish version) application to document species that cannot be recorded in song. One very interesting phenomenon that we observed together was a group of Morpho Telemachus caterpillars, all clinging to a single leaf.

After spending a few days installing the first three stations and documenting biodiversity, we installed the fourth station in a climax forest at Jaguarate. A climax forest is one that has been undisturbed for long enough to reach its successional peak. This forest has been protected from blades for hundreds of years, and the trees have flourished into stunning maturity.

This largely untouched forest is a couple miles out onto the flatlands that drain into the Amazon. In this region, there are many oxbow lakes and other evidence of rivers shifting over time. In initial exploration, some of the same birds that occupy the foothills at el Chocolatal (the location of the other three observation stations) were heard and identified by ear in this forest. While the range of some species may overlap, there will also be differences due to the age of the forest. Cachi, one of the owners and protectors of the land, says some of the trees have reached 600 years old. Their grandeur is difficult to capture in words or with the camera lens.

After returning from installing the fourth station, the team visited the first three observation stations to collect data from the first week of recording. Together, we listened to the audio recordings to explore the data. We will rely on computer programs to process large batches of data. Some of our team members are currently designing a more sophisticated automated system of species identification. As it is now, we use human knowledge to train data sets. Our current programs can scan a month’s worth of data (approximately 75 GB: 28mb per 5-minute WAV file, 4 per hour, recording around the clock) and group the vocalizations into clusters; we have to manually teach the computer which clusters are the sounds of which species.

It was an absolute joy to explore different ecozones of the Bolivian jungle with local community members. The preliminary research sites are up and running; data is being collected now, as you read this. We are excitedly analyzing it and comparing it with the relative silence of audio files from our bioacoustic recorders that were riding through the bleak North American winter at the same time.