Paul Ronk always wanted to live and farm on his family’s land in West Virginia. He just never thought he’d make money doing it. Now, approaching retirement, Ronk finds himself near the center of a modest agricultural boom in the flowing maple syrup businesses.

The maple trees that dot his 105 acres in Lincoln County are layered with meaning. Ronk’s great grandfather planted them to make maple sugar when he bought the land in 1862. He continues to plant maple saplings today, envisioning his grandchildren collecting sap from them in decades to come. Income from the maple syrup has been a lifeline for the farm, allowing Ronk to put in a new high tunnel for vegetables and buy a tractor and truck.

But more than anything, his maple trees represent his hope that West Virginians can stay in the state, make a living and restore the health of their land. 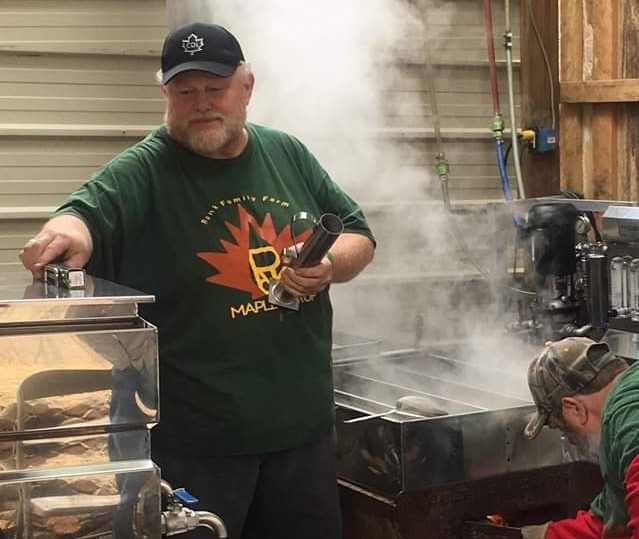 Paul Ronk checking the sugar content of his syrup in front of his evaporator. He started making maple syrup on his West Virginia farm after helping a friend in Ohio.

Even before COVID-19 and the economic downturn, West Virginia had one of the worst job markets in the country. “So many of our young people finish school and pack up and leave because there’s nothing here for them,” explains Ronk. “There’s jobs, but they hardly pay anything. That’s why maple is important. It can supplement what you have.”

Vermont is the maple syrup powerhouse of the United States, producing over two million gallons in 2019. But there are twice the number of maple trees in West Virginia. “The potential is unbelievable,” says Ronk. “We have 60 producers in the state. We could easily have 600.”

That’s why Future Generations launched a maple syrup program, providing farmers the skills and resources they need to earn a living while practicing sustainable land management. Farmers receive mentorship and get plugged into a network of producers, distributors and grant makers. They get everything they need to start a maple operation, from technical skills to case-by-case business coaching. The university, meanwhile, develops the future of agroforestry in the state, looking beyond maple to walnut syrup.

Earn an income & give back to the land

Ronk has been an early–and promising–case study. Guided by Professor Mike Rechlin, Research Faculty member of the maple program at Future Generations University, Ronk learned how to evaluate his trees for production, got hands on experience getting the most out of his taps, mastered the reverse osmosis and evaporation processes and learned how to better market his product.

Maple production has a long history in Appalachia but it has largely disappeared in recent decades. Maple syrup was not on Ronk’s radar when he returned to West Virginia after years as a dairy farmer in Wisconsin and a missionary in Haiti. Every year he’d travel to Ohio with his son, Jacob, to help a friend tap 800 trees, collecting syrup in buckets. After years of helping his friend, it dawned on Ronk to look for maple trees on his own property.

He had 40 buckets his first year and it ended in disaster. Ronk fell walking up and down his hilly property with bucketfuls of sap and ended up in the hospital with a sprain. He also had a hard time identifying maples and “accidentally tapped a few poplars”, he admits with a laugh. 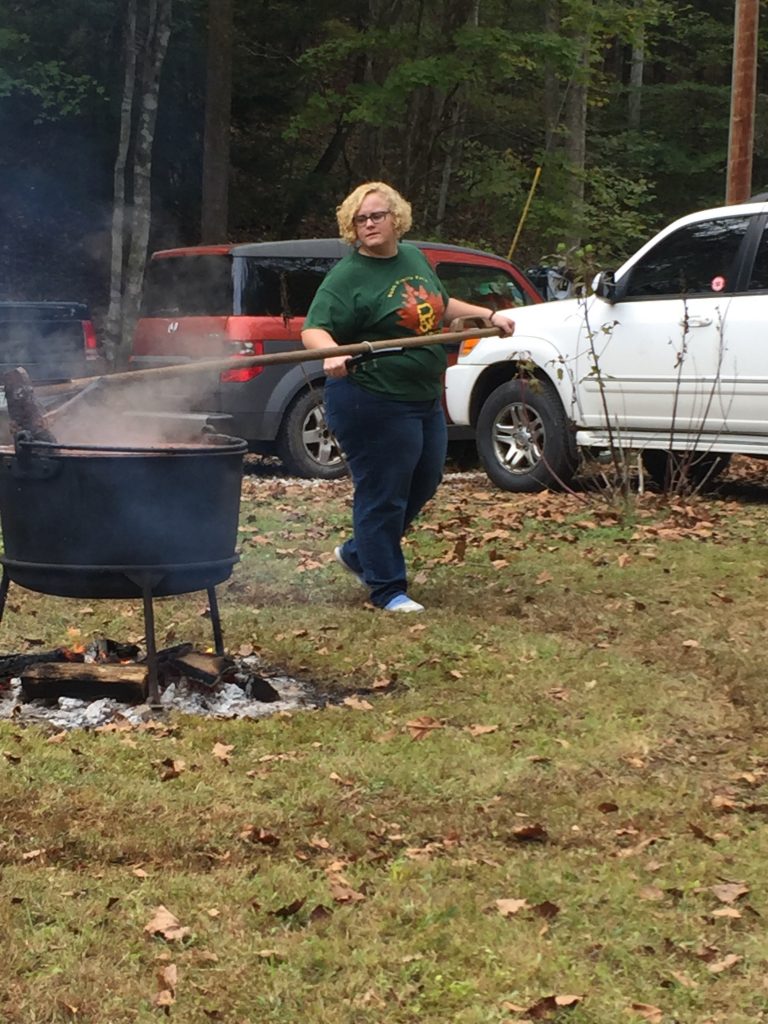 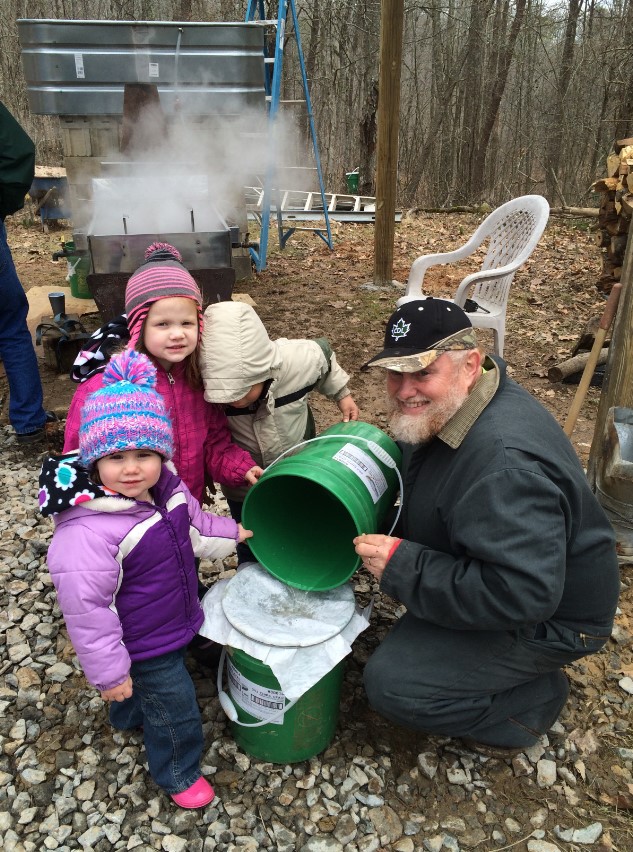 Maple syrup is a family affair on the Ronk farm: (Left) One of his daughters stirs maple apple butter; (right) Ronk pours sap through a filter with his grandchildren.

He was going to sell his evaporator when two things happened: first, he discovered tubing, the plastic lines that now criss cross his sugarbush for more than 20,000 feet, using gravity to drain sap into his sugarshack; second, his son Jacob asked to move home and farm alongside him.

“As soon as Jacob graduated, he couldn’t wait to get off the farm,” says Ronk of his son who followed the path of many West Virginians, moving out of state for employment. He ended up working at a book retailer in Tennessee, earning awards as top salesman and crediting his father with his strong work ethic.

When Jacob called and asked to move back home, he offered his father a vision: he wanted to have the biggest maple farm in West Virginia, Ronk recalls. A few days later, father and son began setting up tubes for the season. 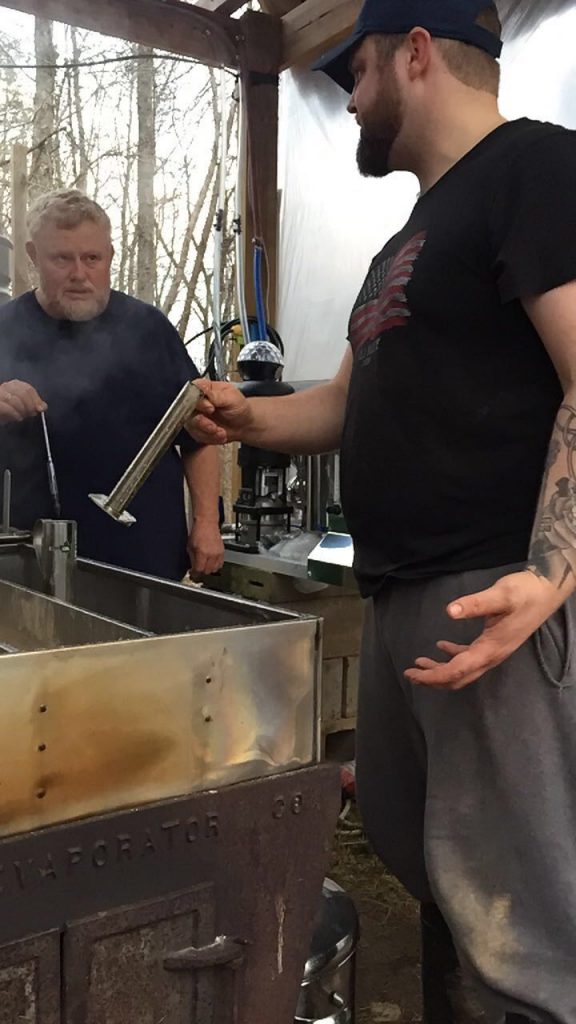 Father and son making maple syrup together in 2017. Jacob moved back to West Virginia to farm with his father, bucking a trend that’s seen thousands of young people leave the state each year for work.

“My son and I didn’t see eye to eye on everything, but that’s one thing we shared,” explains Ronk. Jacob took over cooking the sap in their open air sugarshack, standing over the evaporator like a chef in a kitchen, while his father continuously fed the fire.

Cooking sap is as much an art as a science. It takes dozens of gallons of sap to produce 1 gallon of syrup and Ronk’s first time on the evaporator he burned his pans producing a thick caramel. But Jacob quickly displayed a knack for it, creating rich, beautifully-colored syrup with a perfect 66 percent sugar content.

Father and son were hitting their stride with maple. Then, in a freak accident, Jacob died. He choked while eating.

“I wanted to give up, but it didn’t take me long to realize his dream had become my dream too,” Ronk says. He kept tapping more trees and, within weeks, began doing outreach to local farmers, encouraging them to diversify their farms and put their maple trees to use. Then he opened his farm up to Future Generations, allowing the university to hold demonstrations in his sugarbush. At least two farmers in the county–Chad Trent and Herman Hill–were inspired by Ronk to take courses at the university and set up their own maple operations. “There’s no better reward than seeing other farmers get into maple syrup.”

Ronk opened his farm up to Future Generations, allowing the university to teach others to tap their trees, produce maple syrup and market their product to earn an income while taking care of the land. (Clockwise from top left) Professor Mike Rechlin shows how to clean tubes and inspects sap bucket; Future Generation students learn to tap a tree; Ronk talks to students about sap collection.

Ronk has always loved this land, but it’s only recently that he’s started earning a living off of it. There is healing to be done, he explains, after decades of extracting resources from nature. He hates to see trees cut down, but he thins the woods when needed to help the maples develop, striking a balance between conservation and development.

“That’s my hope, that everyone in West Virginia can see this and try it. So many young people leave, but if they could walk in the trees and smell the maple, if they could plant their crops and make a living, they’d stay.”

Learn at your pace and build your future with maple syrup
(Visited 615 times, 1 visits today)